Radiocarbon in Coal, Oil, and Diamonds

Students are shown pictures of ancient swamps and told that swamps covered the landscape 350 million years ago, and as dead organic matter piles up, they slowly turned to coal as they were buried under enormous pressure over vast periods of time.

First, coal seams are almost always layered in appearance. Those old enough to remember coal being delivered for home heating will attest that it breaks apart in layered sheets as it is dumped. If one were to place enormous piles of undecayed vegetation under tremendous pressure—like massive mats of destroyed vegetation from a global flood– the result would be exactly what we find: layered coal seams around the world of varying thicknesses. Yet this is not what we find in peat swamps and forests. In forests, the decaying vegetation is a recycled into soil and humus. In swamps, the peat is blended and mixed by roots and organisms. It does not form a sheet-like, layered appearance. Rapid burial of the entire biosphere (all of the vegetation covering the entire planet by a catastrophic worldwide flood) would account for the size and character of the current coal seams of the world (75% of the earth’s land surfaces are water-deposited sedimentary rock). No other model adequately explains the widespread, worldwide distribution of coal. In addition, there are many examples of carbonized trees extending upward through multiple layers of coal, sandstone, and coal again (polystrate fossils). How could these trees have stood upward through multiple layers of sediment, for millions of years, while rock layers formed around the vertical trees (without rotting away)?

Secondly, coal contains measurable amounts of radiocarbon. This is significant for the following reason. Carbon-14 dating has long been unjustifiably promoted as definitive proof that the Bible is wrong when it speaks of an earth six to seven thousand years old. Carbon-14 is a radioactive element which disappears over time as the unstable carbon atom (which contains eight instead of the normal six neutrons in the nucleus of the atom) beaks down to form an atom of nitrogen. At today’s decay rate, half of any starting amount of carbon-14 disappears every 5,730 years (its half-life). Carbon-14 is present in all living organisms today in the proportion of about one radioactive carbon-14 atom for every trillion regular carbon-12 atoms.

As long as any organism is alive, it is taking in radioactive carbon that exists in the atmosphere and incorporates this carbon into its tissues. However, as soon as the organism dies this intake ceases, and the radiocarbon in the creature’s cells begins to decay. After 5,730 years half of the original radiocarbon would be gone. In 11,460 years three-quarters of the original radiocarbon would be gone, etc. Since the original amount of carbon-14 in living organisms is incredibly small, the measurable amount of carbon-14 eventually reaches immeasurable levels very quickly relative to the great age evolutionists assume for the earth.

At the current decay rate of carbon-14, this immeasurable level corresponds to approximately 100,000-200,000 years of decay. However, because the world was likely a paradise before the flood (and there is general agreement that the continents were together in a single large land-mass), there would likely have been ten times (or more) vegetation on the globe before the flood than today. (Remember, in Genesis 1:7 and elsewhere it says that God had not caused it to rain upon the earth; a mist came up from the ground, with “water above the firmament (the space-or stretched-out thinness), probably in the form of a water-vapor canopy, which would have contributed to a wonderful, uniform and pleasant worldwide temperature and climate, or greenhouse effect). But the same generated amount of radiocarbon, through ten times as much vegetation, would put the concentration at only ten percent of current levels. Thus things alive before and immediately following the flood would date at almost 20,000 years old, even while still alive!

The most important observation, however, is the speed at which the radioactive carbon disappears. Carbon-14 decays so fast that not a single atom of carbon-14 could remain in even a mere 240,000 years. Thus, if carbon-14 is still found in ancient organic matter, it is proof that this organism cannot possibly be millions of years old. It is a scientific fact that every known coal seam, assumed to have been deposited 30 to 300 million years ago, contains an average 0.25% of modern radiocarbon levels left. That is well over 200 times greater than the detection limit of the equipment. Yet not a single atom should be detectable.

Significant amounts of carbon-14 are also found in petroleum, hydrocarbons, diamonds and very recently even some dinosaur fossils indicating recent formation. It doesn’t take millions of years to form coal, oil, diamonds and fossils – it just takes the right conditions – rapid burial of life forms by sediments with tremendous pressure and heat. In the laboratory, under these conditions, they can be formed from organic matter in hours and days, and amazingly in just weeks or months even without pressure.

It is readily apparent from both the characteristics of coal seams and the carbon-14 remaining within coal that the earth’s coal seams were formed quite recently. The widespread nature of coal deposits testify to the worldwide nature of the flood which created them. Were this event not so closely tied to biblical revelation and so destructive to a belief in slow and gradual evolutionary processes, it would rapidly be accepted as the correct explanation. 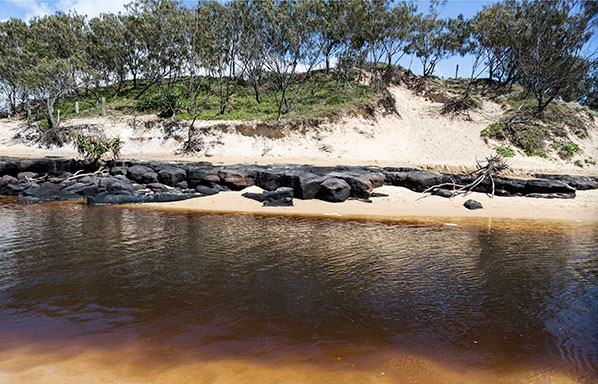 Genesis Is Not Mythology

One just has to put biblical glasses on. The worldwide cataclysm of Noah’s flood was real, occurring some 4,300-4,400 years ago. The Bible spends four chapters in Genesis talking about this amazing event—even more than it spends on Creation. Look around; all we find is billions of dead things, laid down by water, all over the earth. Genesis is not mythology, or a story to push readers toward some nebulous truth, or Hebrew poetry. Genesis is clearly written as an historical narrative, and it and the Flood are referred to many times in the Old and New Testaments, even by Peter and Jesus himself. As Jesus explained to the supposedly great Hebrew scholar Nicodemus, in John 3:12, “If you don’t believe in the earthly things (like the worldwide Flood-for which there is much evidence), you’re not going to believe in the spiritual (or heavenly) things (which have to be accepted on faith).”

(* Much of this was gleaned from Censored Science, by Bruce Malone, Search for the Truth Ministries)